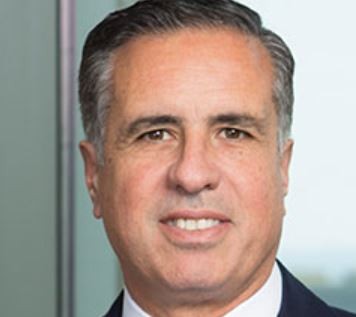 The big beasts are out in force at JPMorgan today. It's JPMorgan's first investor day for two years and is all about justifying the bank's decision to hike overall costs by an extra $6bn in 2022 alone.

In his introductory presentation, Dimon took the opportunity to heap praise on his heir apparent. JPMorgan is "blessed" to have Daniel Pinto, "with his extraordinary brain and capabilities," declared Dimon.  The implication is that Pinto's move from London to New York City is going well and that Pinto, who currently runs the corporate and investment bank (CIB) as well as being president and COO, is well worth $28.5m JPMorgan paid him last year. Pinto is just one of the "quality people" who are "honest and give a damn" at JPMorgan, said Dimon.

However keenly JPMorgan loves its employees, though, far more money at the bank is being poured into new technology rather than into new human beings. JPM is investing an extra $6.7bn in technology this year, of which $4.1bn will go into "products, platforms and experiences" and $2.6bn will go into software modernization, data, and cybersecurity. 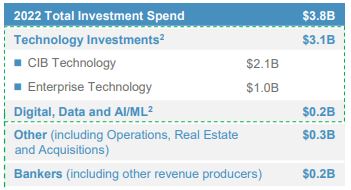 While $3.1bn is being spent on technology investments in the CIB, JPMorgan's 2022 investment plan includes just $200m for hiring new bankers and traders in the front office. This would pay for seven new Pintos with their extraordinary brains, but JPMorgan doesn't need another President.

Instead, it's closing gaps in the following areas and presumably plans to hire bankers to liaise with middle market financial sponsors as well as private capital specialists, tech and healthcare bankers in Asia, and ESG advisory specialists globally this year.

Where JPMorgan wants new bankers in 2022 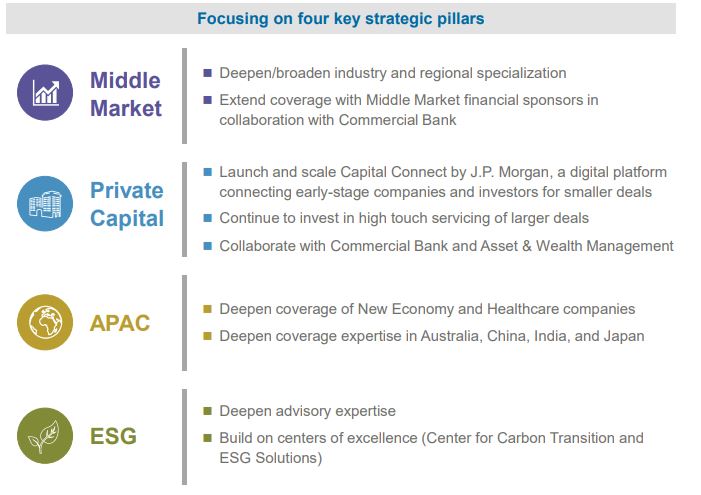