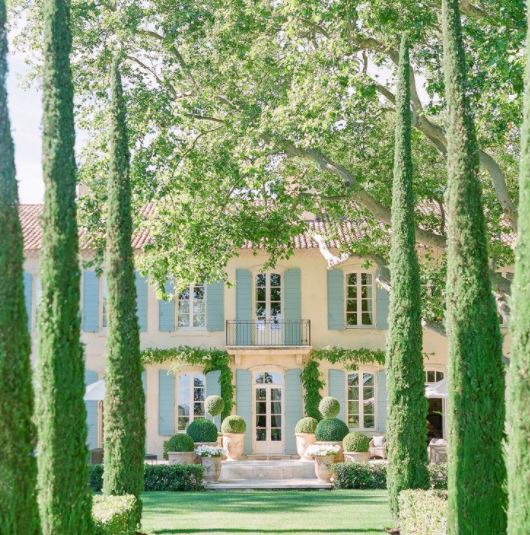 When you're the spouse of a banker with a highly demanding job, it helps to have some interests of your own, and it's not uncommon for those interests to involve interior design.- Andrea Orcel's wife dabbles; so too does the wife of Rajeev Misra, head of SoftBank's Vision Fund. Having flexed an interest in aesthetics, it's also not unusual to invite a magazine along to publicize your handiwork.

This appears to have been the thought of Shauna Varvel, wife of Eric, former head of Credit Suisse Asset Management. Six years ago, New Yorkers Shauna and Eric bought a large 18th century farm house, 'Le Mas des Poiriers,' with 65 acres in the Provence region of France.  While Eric was working for Credit Suisse in London, Shauna - a former PR for Estee Lauder - worked on the new French house and gardens with the help of architect Alexandre Lafourcade and 'famed Provencal landscape architect,' Dominique Lafourcade. Six years, 200, trees and an entire renovation and refurbishment later, it's complete. Shauna has released a book about her design insights and she, the house and Eric were profiled in the London Times at the weekend.

The house looks beautiful and its refurbishment is certainly a kind of achievement, but as Finews points out, it's also not ideal timing to be boasting about all the money you've spent on a super-deluxe holiday house. Eric Varvel was managing Credit Suisse's asset management business until he was asked to focus on other roles (he's also head of the U.S. holding company and chairman of the investment bank) by Credit Suisse CEO Thomas Gottstein in March 2021 following losses of $3bn on Greensill funds. After Credit Suisse also lost a further $4.5bn on family office Archegos, despite only earning $17.5m in fees the previous year, incoming chairman António Horta-Osório is now contemplating a major shake-up that could involve closing entire divisions of the investment bank or spinning it off altogether.

Varvel has worked at Credit Suisse for 31 years and clearly amassed some handsome bonuses and houses over that period (he also has/ had a summer house in Utah and a large house in Greenwich, Connecticut, both of which have also had their moments in interior magazines).  When Horta-Osório casts an eye over compensation, he may therefore conclude that Varvel is already very well provided for. Irrespective of 2021 pay, Varvel's deferred bonus for 2020 is being clawed back as a result of Greensill. If things become too tight, he could always rent out Le Mas des Poiriers to colleagues. The sumptuous French house is already, 'available exclusively for weekly rental for a select few weeks each year,' but could be rented more frequently to provide a generous replacement income. Contact details are available here...

Separately, as banks make moves to summon people back to the office, it seems likely that some will decide that they'd rather do something entirely different instead. Bloomberg claims to have unearthed a rush of Americans in their late 40s and early 50s who don't fancy a return to the commute. One, 'an executive whose stock portfolio has performed well', is reportedly retiring at 48 as the prospect of having to go back to traveling 10 to 12 nights a month isn’t appealing anymore.

Credit Suisse lent money to Archegos allowing leverage of up to ten times, and only asked for collateral worth 10% of the sums borrowed. (Bloomberg)

JPMorgan analyst Kian Abouhossein estimates Credit Suisse's prime brokerage unit made $900m of revenues last year, just over a third of the total from its equities business. “We see shrinkage as a material setback for the overall long-term viability of Credit Suisse’s investment bank,” he added. (Financial Times)

Jacobs said: "This should be a reasonable year for growth in hiring. I'd expect 2022 to be even better." Long hours are "come with the turf" in banking, he added. (Financial News)

“Having it all” meant listening to her 6-year-old sob and bang on her door in search of comfort and not being able to give it to him, because she was in the middle of an important call. “The distance that you have as a parent working outside of the home keeps you from seeing these things.” (The Atlantic)