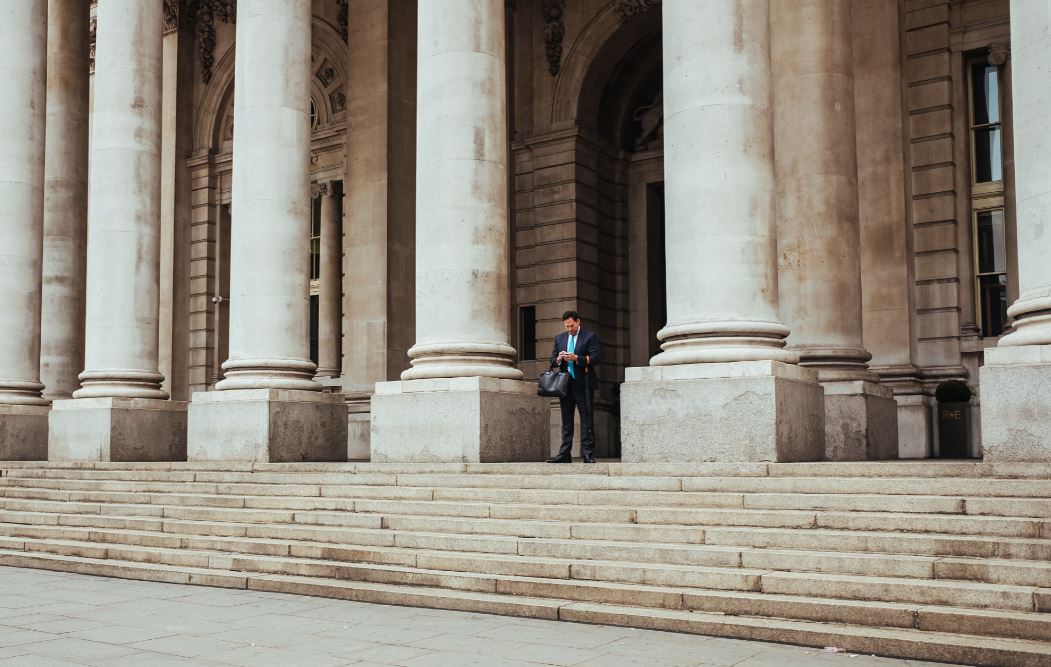 Once, it was a mystery how much banks paid their top performers. - Headhunters had information as did pay benchmarking firms, but the data was always parsed through third parties. Nowadays, we know exactly how much banks pay their most valued staff in London by virtue of the British BIPRU rules on remuneration disclosure.

The BIPRU rules state that all banks operating in London, U.S. banks included, must disclose the amounts they pay their risk takers and the structure of those risk takers' compensation. These disclosures are typically made up to a year after those payments were made. Goldman, JPMorgan, Citi, Bank of America and Morgan Stanley have all now lodged their disclosures for 2018, meaning we know exactly how much they paid their most important staff  over 12 months ago. The pertinent data from each bank's filing is shown below. Bonus figures are only for bonuses awarded in 2018 and don't include earlier bonuses that vested last year.

There are a few things to note from the most recent filings. Firstly Goldman Sachs and Morgan Stanley both pay the most, at an average of $1.5m in combined salary and bonus. JPMorgan follows, with an average of $1.45m. Citi and BofA trail with averages of $1.2m and $1.1m respectively.

Criteria used to determine pay at Goldman’s investment bank? At the business area and individual level, Goldman looks at pre-tax income, lost business, revenue and backlog, client team and activity, relationship lending history, ‘principalling’, key transactions, as well as franchise accretion. At the firm-wide level, it takes into consideration ROE, diluted earnings per share, book value per share, net earnings, net revenues, spending on compensation, the proportion of revenues that are spent on compensation, and non-compensation spending. Goldman operates '360 degree reviews' when it appraises staff - appraisers include, 'supervisors, peers and those who are junior to the employee.'

Deferral policy? Stock bonuses are typically deferred over three years, with amounts vesting equally on the first, second and third anniversaries of the award date. However, some regulated staff at Goldman in London get their stock bonuses deferred for five years, and senior managers have to wait for seven years until bonuses are fully vested.  Even after stock bonuses have vested, individuals are also required to retain around 100% (after tax) of their restricted stock units for up to five years after the award date. Goldman bankers are banned from hedging against their vested shares during this period.

Total value of sign-on bonuses paid during 2018:  Goldman Sachs International made 13 sign-on payments in 2018, worth a combined $5.3m.

Distribution of compensation among code staff earning more than 1m euros at Goldman Sachs in 2018: 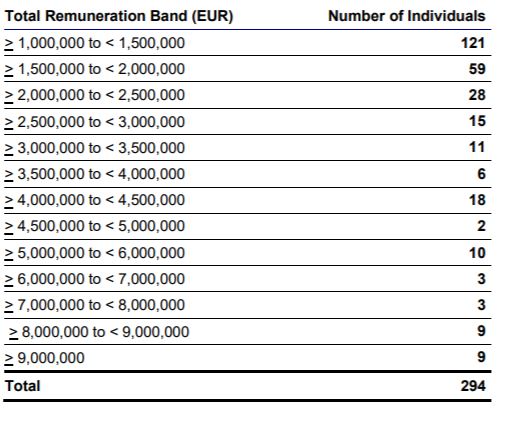 Which external pay consultant does J.P. Morgan use? Not stated.

Deferral policy? J.P. Morgan doesn't provide information on pay structure for 2018, but in the past Managing Directors at the bank were subject to a 35% minimum deferral irrespective of their level of compensation. Restricted stock units vest over three years, but vesting is skewed towards the end – 50% vest in year two and 50% vest in year three.

Number of regulated staff at the corporate and investment bank in the UK in 2018:  598.

Average total compensation per member of UK regulated staff in the investment bank in 2018: $1.45m.

Total value of sign-on bonuses paid during 2018:  JPMorgan made six sign-on payments in 2018, worth a combined $3m.

Distribution of compensation among code staff at J.P. Morgan in 2018:

Which external pay consultant does Citi use? Not stated.

Criteria used to determine pay at Citi?  Citi pays individual bonuses partly based on its leadership standards, which include things like 'develops our people', or 'lives our values' and 'champions progress.'

Deferral policy? Material risk takers at Citi have their bonuses deferred for three years, after which they're subject to a further retention period of six to twelve months.

Number of regulated staff in the UK in 2018:  507 in the Institutional Clients Group at Citigroup Global Markets, excluding control functions and senior management.

Total average compensation per member of code staff in non-control roles at Citigroup global markets in 2018: $1.2m (same as 2017).

Distribution of compensation among code staff at Citi in 2018: 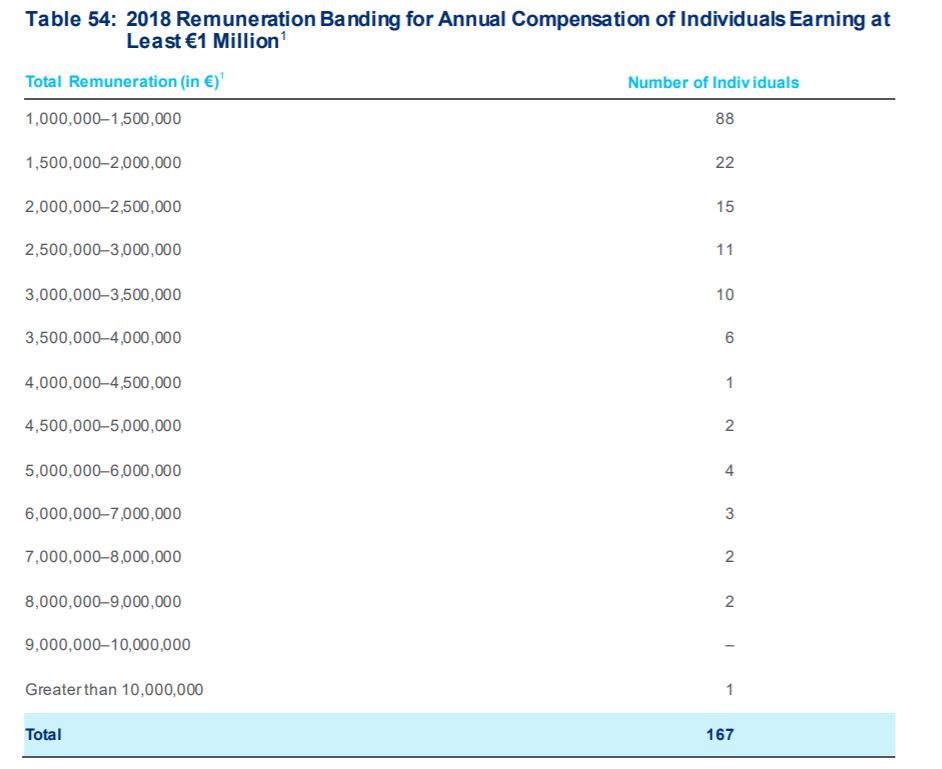 Which external pay consultant does BAML use? Farient Advisors LLC.

Criteria used to determine pay at BAML? BAML staff in Europe are awarded bonuses based upon their results and their behaviour. They receive a rating for each. (BAML says, "Employees receive two ratings – a Result rating (based on objective metrics such as business performance) and a Behavior rating (based on subjective metrics such as contributions to the 4 Company, leadership, conduct, teamwork, etc.). The scale for both ratings is Exceeds Expectations, Meets Expectations, and Does Not Meet Expectations.")

Deferral policy?  Longer term equity-based pay awards are deferred over three years and must be retained for a further six months after vesting.

Total average compensation per member of BofA global banking and markets staff in the UK in 2018: €982k ($1.1m)

Distribution of compensation among code staff at BAML in 2018:

Which external pay consultant does Morgan Stanley use? Not stated.

Criteria used to determine pay at Morgan Stanley?  On an individual basis, Morgan Stanley looks at contribution to revenue and profitability (whilst taking risk into account), teamwork, management abilities (including the ability to attract and retain core talent), at technical skills, adherence to core franchise values and business principles and policies and at market conditions.

Distribution of compensation among code staff at Morgan Stanley in 2018:

Photo by Robert Bye on Unsplash