According to fixed income headhunters, a damp blanket has fallen upon the City, and it is not attributable to the snow. "There's a lot of realism going around," says one. "The revenues just aren't there any more."

The source of this realism is clearly illustrated in a graph from Glenn Schorr, the US banking analyst poached by Nomura from UBS. As Schorr shows, banks have hired; revenues have fallen. 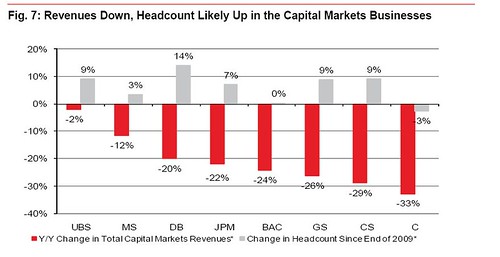 Bob Diamond is so good, Barclays is speeding up his CEO accession by three months. (BusinessInsider)

The FSA's negotiating with UK banks to work out who's covered by the new bonus rules. (Bloomberg)

James Gorman has threatened to "personally escort" [out] anyone found leaking any details of Morgan Stanley's compensation levels to the media. (NY Post)

The world's largest banks must raise €577 billion (488 billion) in capital to comply with new global regulatory standards, or face restrictions on bonus and dividend payouts. (The Times)

Why are bankers so rich? (MotherJones)

The number of professionals working in investment banking and securities dealing in New York City fell 17% in November from a year earlier. (Wall Street Oasis)

A group of AIB staff are going to court to try and reclaim their bonuses. (Guardian)

The Nomura banker in charge of its prime services push has left. (Financial News)

Investment bankers banned from driving up the price of turkeys. (Guardian)

A 1% increase in the net of tax share is associated with an 0.7% reduction in incomes earned by people in the top 0.1% of the income distribution. (Marginal Revolution)

Lloyd Blankfein was overheard bragging to one extremely powerful hedge fund manager and renowned contemporary art collector about the price of the art in the lobby. (Reuters)