Why US quantitative easing could be beneficial for your bonus

Yesterday, Robert Zoellick, president of the World Bank, suggested it might be a good idea for a return to the gold standard.

For the moment at least, this looks unlikely. It would probably, in any case, be unfeasible. This is fortunate, because, as Edmund Conway points out, a return to the gold standard would mean an end to the banking system as we know it.

Instead, we have $600bn of quantitative easing and the prospect of more to come.

Superficially, this is a good thing. Quantitative easing means low interest rates and low interest rates mean the opportunity for banks to borrow cheaply and invest for a higher return. But Dirk Hoffman Becking, an analyst at Bernstein Research, Hoffman says there are several other reasons why quantitative easing should increase revenues at both European and US investment banks.

He also provides the following graph depicting the close historical (if not recent) relationship between the S&P 500 index and investment banks' revenues. The hope? More quantitative easing will lead to a higher S&P and higher investment banking revenues. 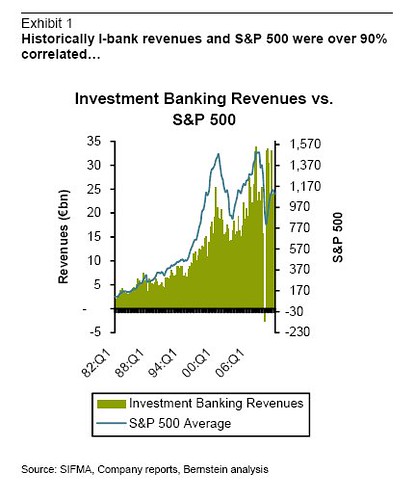 Longer term, large amounts quantitative easing could prove less fortuitous for banks. While there may be opportunity to make money from inflation hedges, the correlation between high inflation and banking revenues is less clear. Neither Zimbabwe nor Weimar Germany are/were known for their investment banking sectors.