In fact, the harsh new EU bonus rules may apply to hardly anyone

After all the attention devoted to the bonus edicts emanating from the Committee of European Banking Supervisors (CEBS), it's starting to look like the new roles will only impact a small minority of people working in the City.

As a brief reminder, the rules state that some people will have anything from 40-60% of their bonus deferred over three years. Of the remaining 'non-deferred element,' only 50% will be immediately accessible. As a result, some people will only get 20% of their overall bonus as readily available cash in 2010. (For more information, click here.)

This does not sound appealing. However, Jon Terry, head of the reward and compensation practice at PricewaterhouseCoopers, says initial indications are that the new rules could only impact around 150 people per bank.

Who are the code staff?

In the UK, the CEBS bonus rules, which are due to be finalised on December 8th, will apply only to 'code staff.'

Code staff were defined by the FSA in its

draft compensation code earlier this year. The FSA's summary definition was presented in the table below. 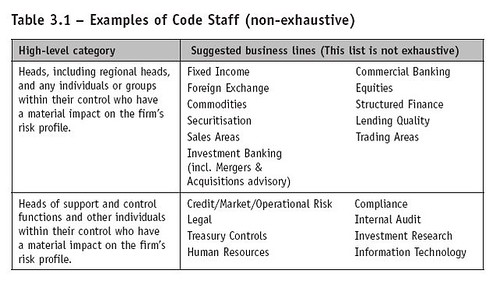 Although this sounds fairly comprehensive, Terry says banks are arguing that code staff are few and far between.

"On average banks have only put forward 150 people each to be categorised as code staff," he says. "The FSA are discussing this with them and will finalise numbers over the next week."

Last year, Terry says banks each submitted details of around 300 people to the FSA under what was then the 'Principle 8' code for significant influence functions, members of which had their bonuses restricted. This year, therefore, it looks like the new rules may apply to HALF the number of people impacted by the FSA's bonus dictates in 2009.

However, Chris Page, head of employee incentives at KPMG, cautions that the number of code staff may rise: "The definition of code staff is very wide and these numbers sound low," he says.

Anyone not deemed code staff will get a lower proportion of their bonus deferred and a (far) higher proportion in cash. 33% spread equally over three years is expected to be the norm.

Certificates of deposit for code staff?

Separately, the Financial News reports today that banks are looking at alternative methods of delivering bonuses that fall under the EU rules.

They include 'certificates of deposit or restricted loan notes' which promise to pay the holder a fixed sum at a point in the future.

Terry says banks want to use these instruments for the non-deferred element of code staff bonuses which nevertheless can't be accessed immediately. Certificates of deposit are more appealing than shares because their value won't decline. However, it's still not clear whether the FSA will sanction this.

Financial News has also been making a big deal about the prospect that high earners who only receive 20% of their 2010 bonus in immediately accessible cash and another 20% in, for example, restricted loan notes which are unaccessible for a year, could be left with a tax liability which outweighs the money in their pocket.

Terry says this isn't an issue in the UK, where an immediate tax liability can be easily avoided by adding in clauses specifying that restricted loan notes could be clawed back in the event of gross misconduct or fraud. However, he says it is less easy to avoid in Eastern Europe or the US, where the rules will also apply to employees of EU-based banks. Highly paid Wall Street bankers could, in particular, be in for a shock.