Goldman reveals it's been squeezing its staff in London and New York, hiring massively elsewhere and that 25% of its people are in IT

If you work at, or want to work at, Goldman Sachs, you are advised not to be based in the G10.

On the other hand, you may wish to locate yourself in China, India, 'growth Asia' or Latin America. Or you could try working anywhere in the world in IT.

Also, it's probably not worth trying to get a job at Goldman in the Middle East.

Yesterday, Lloyd Blankfein made a presentation replete with golden arrows on a beautiful blue background, which imparted all this information and more.

· Goldman's 'growth market' headcount has grown at a CAGR of 33% over the past seven years vs. a business average of 7%.

· Goldman's 'franchise volumes and revenues' have doubled in the G10 in the past 5 years, but headcount there has remained mostly static

According to the graph below (taken from Lloyd's presentation) growth markets are China, India, 'growth Asia' and Latin America. The Middle East is classified as a growth market too, but seems strangely immobile. 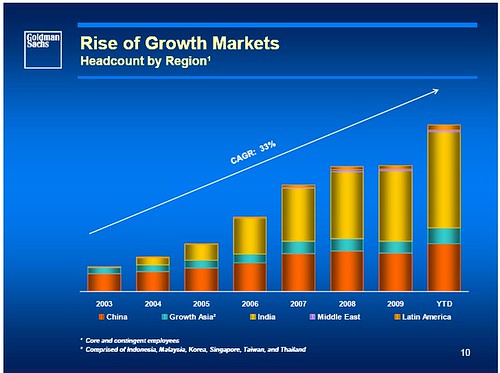 What with the headcount stasis in the G10, students are probably advised not apply for jobs at Goldman in London or New York. They may want to give 'growth markets' a try.

Lloyd didn't say much on pay, except that he'd "do what's necessary" and compensation has been at 50% of revenues historically.

However, it may be worth noting that US banking analyst Dick Bove has been getting all excited about compensation costs at GS

By 2013, Dick is now predicting that total compensation at the bank will have risen 60% on 2009, to $26bn. Over the same period, he thinks revenues will rise 30% and that profits will rise 13%. Someone at Goldman is going to be doing rather well. Unfortunately, they may not be based in London.