As well as its highly-publicised bonus cancellation, Swedbank has shown some 2,571 employees the door this year and posted its fourth quarterly loss in a row today. But it's "feasible" that the bank could return to profit in 2010.

Swedbank reported a fourth quarter net loss of SEK1.8bn, compared to a profit of SEK1.92bn for the same period last year, after continuing problems in Russia, the Ukraine and Baltics.

Bonuses were slashed across the board - including within its profitable Swedbank Markets division - but SEK191m was allocated for performance-based compensation in its Norwegian subsidiary First Securities.

Baltic banking accounted for 1,352 of Swedbank's job cuts after 52 (or 19%) of its branches were closed, while 1,068 redundancies hit its International Banking arm.

By contrast, headcount increased within its Swedbank Markets and asset management division, which have helped to offset losses in other parts of the business.

"2009 will be remembered as one of the most turbulent years in Swedbank's history," said CEO Michael Wolf, adding: Given that the global macro economy continues to develop positively without substantial divergence, particularly in Latvia and Ukraine, a profit for the full-year 2010 is feasible." 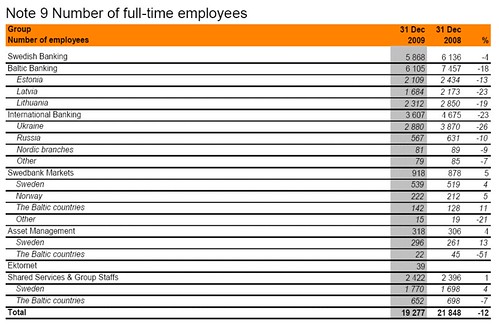