Heavy exposure to the slumping Baltic states has played a major part in Swedbank's SKr3.36bn first quarter loss. The upshot of this, however, is that the bank will create around 240 jobs for a new risk management unit to tackle distressed debt in the region. 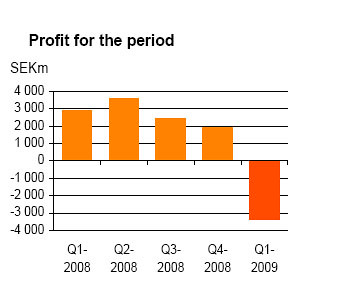 In spite of the headline figure, most divisions of Swedbank actually performed fairly well. It's just that impairment on loans increased by SKr6.6bn (from SKr0.2bn), of which SKr4.2bn came from Baltic banking.

It's not surprising, therefore, that the bank has felt the need to take some action and has created a new division to deal with these problem loans - the Baltic Financial Restructuring and Recovery Unit.

Up to 200 people will be recruited for the unit, which aims to be active before the end of the first half of 2009.

The new roles are essentially risk management positions, and indeed will report to the chief risk officer at Swedbank.

Their job will be to attempt to eliminate the risks from the deteriorating financial position of businesses and individuals responsible for the impaired loans and attempt to return them to a profitable position in order to try and claw some of the money back.

The new recruits are required to be based in the Baltic region, but Swedbank says it's looking for experience of guiding companies through similar recessionary situations and thinks it'll find this expertise in places like the UK, Sweden and Germany.

Another 40 people will be recruited specifically to tackle Ukraine, a country which (together with Russia) the bank says it is likely to target with "a lower level of ambition".

Within its Baltic operations, staff costs have slumped by 22% due to lower bonuses and reduced headcount, and Swedbank expects more cuts going forward.

FX and fixed income drove the highest profits ever in the markets division - SKr543m, compared to SKr251m for the same time last year. Employees in these divisions enjoyed bumper bonuses, with the profit-based staff costs reaching Skr144m in the first quarter of 2009, up from SKr51m for the same period in 2008.

The number of staff in this sector has increased by 12 since the end of last year.

Income in the Swedish retail division was up 12% to SKr3.3bn compared to the same time last year. Staff costs, however, were down 2% through 92 redundancies in this network.

"During the first quarter, we have decided to sell a number of local branches to the savings banks, in order to further strengthen the customer product offering and develop an attractive and cost-efficient service," said Michael Wolf, president and CEO of Swedbank.